Deprecated: Methods with the same name as their class will not be constructors in a future version of PHP; WP_Categories_to_Tags has a deprecated constructor in /var/www/vhosts/aedei.es/httpdocs/wp/wp-content/plugins/wpcat2tag-importer/wpcat2tag-importer.php on line 31
 NEW PUBLICATION: Giulia Bruna. J.M. Synge and Travel Writing of the Irish Revival (Syracuse, NY: Syracuse University Press, 2017) - AEDEI 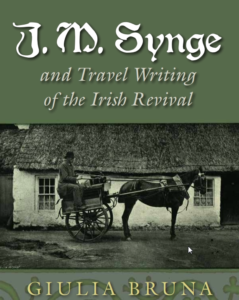 Praise for the book:
“Stylish and probing, Bruna’s study is finely alert to Synge’s travel writings and to the popular and literary cultural contexts out of which they came. Itself highly original, it shows how Synge, in implicit dialogue with previous Irish wanderers and with the journalism of his day, created wholly new kinds of travel narrative. With this work, Bruna has not only taught us new ways of reading Synge but of decoding the entire Irish revival.”—Declan Kiberd, author of The Irish Writer and the World

“Bruna expertly delineates the manner in which Synge’s travel writings about Ireland do not fit neatly into the dominant imperial or nationalist tenor of the texts produced by his contemporaries.”—Mary M. Burke, author of “Tinkers”: Synge and the Cultural History of the Irish Traveller

Book Description:
Between the late 1890s and the early 1900s, the young Irish writer John Millington Synge journeyed across his home country, documenting his travels intermittently for ten years. His body of travel writing includes the travel book The Aran Islands, his literary journalism about West Kerry and Wicklow published in various periodicals, and his articles for the Manchester Guardian about rural poverty in Connemara and Mayo. Although Synge’s nonfiction is often considered of minor weight compared with his drama, Bruna argues persuasively that his travel narratives are instances of a pioneering ethnographic and journalistic imagination.
J. M. Synge and Travel Writing of the Irish Revival is the first comprehensive study of Synge’s travel writing about Ireland, compiled during the zeitgeist of the preindependence Revival movement. Bruna argues that Synge’s nonfiction subverts inherited modes of travel writing that put an emphasis on Empire and Nation. Synge’s writing challenges these grand narratives by expressing a more complex idea of Irishness grounded in his empathetic observation of the local rural communities he traveled amongst. Drawing from critically neglected revivalist travel literature, newspapers and periodicals, and visual and archival documents, Bruna sketches a new portrait of a seminal Irish Literary Renaissance figure and sheds new light on the itineraries of activism and literary engagement of the broader Revival movement.
Tagged on: giulia bruna, Irish studies
By admin | 10/01/2018 | Publications | No Comments |