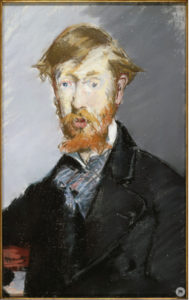 George Moore: Transnational and Cosmopolitan Networks on the Page and Canvas

‘I wrote The Untilled Field, a book written in the beginning out of no desire of self-expression, but in the hope of furnishing the young Irish of the future with models. Yeats said that I had learned the art of presentation in Paris, and in 1900 we believed that the Irish language could be revived.
I wrote “The Wedding Gown”, “Almsgiving”, “The Clerk’s Quest”, and “So On He Goes”, in English rather than in Anglo-Irish, for what help would that pretty idiom, in which we catch the last accents of the original language, be to Taigh Donoghue, my translator?’
George Moore, The Untilled Field (1903), Preface.

The stimulus of Impressionism and Realism, both in art and literature, on George Moore (1852-1933), led him on a quest to infuse English and Irish writing with state-of-the-art literary themes and forms. Moore’s initial works were informed by Realism and Naturalism. His time in Paris deeply influenced his literary style and aspirations, and gave him a self-consciously avant-garde perspective. His participation in diverse social, musical, and cultural spheres prompted him to explore areas that were untraditional and ground-breaking. Thus, Moore’s oeuvre is replete with transnational flavours derived from his experience of literary and artistic circles in cosmopolitan cities. The significant feature of Moore’s cosmopolitan aesthetic is the visual, whether in depictions of the city, landscape, or in portrayal of characters. The focus of this conference will concern the relationship of George Moore and his works to:

Topics could include, but are not limited to: