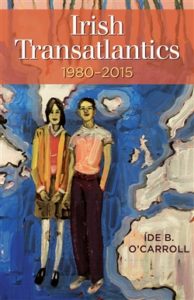 Something happened during a thirty-five year period from 1980-2015 to unsettle what had previously been a predominantly one-way story of emigration from Ireland to America. The Irish who arrived in the US in the 1980s could return home in the late 1990s because the economy improved. Many did so, while others remained living stateside. The scale of return was unprecedented and it happened side by side with an explosion in information and communications’ technology. Irrespective of where they chose to locate, over the following decades, these Irish migrants could maintain and sustain transnational connections in both places because of the availability of email, Skype, social media and cheap airfares.

Other unusual aspects to this migration are unlikely to be repeated. Many lived and worked as ‘illegals’ in the US. In response, they established the Irish Immigration Reform Movement (IIRM) and built sufficient political capital to deliver special visas for the undocumented in the 1990s. Both steps seem unimaginable in a post 9/11 America.

This book explores the stories of 20 Irish men and women who navigated a changed migration circuit to understand how they adapted to life ‘here’ and ‘there’ across the Atlantic. These stories highlight the value and complications of transatlantism and its impact on a sense of belonging and identity. Their reflections offer valuable insights to those Irish migrants navigating the current long distance circuits between Ireland, Canada and Australia and the current group of ‘undocumented’ Irish in the USA.

Íde B. O’Carroll is an Irish-born social researcher and writer who lives in Amherst, Massachusetts and Lismore, County Waterford. Visiting Scholar at Glucksman Ireland House, NYU from 2013-2017, she currently teaches at UMass-Amherst.