Deprecated: Methods with the same name as their class will not be constructors in a future version of PHP; WP_Categories_to_Tags has a deprecated constructor in /var/www/vhosts/aedei.es/httpdocs/wp/wp-content/plugins/wpcat2tag-importer/wpcat2tag-importer.php on line 31

Notice: WP_Scripts::localize was called incorrectly. The $l10n parameter must be an array. To pass arbitrary data to scripts, use the wp_add_inline_script() function instead. Please see Debugging in WordPress for more information. (This message was added in version 5.7.0.) in /var/www/vhosts/aedei.es/httpdocs/wp/wp-includes/functions.php on line 5313
 International conference: Secrecy and community in contemporary narrative in English - AEDEI 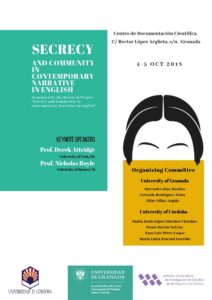 University of Granada, Spain
4th-5th October, 2018
Organized by the Research Project “Secrecy and Community in Contemporary Narrative in English”

International conference ‘Secrecy and Community in Contemporary Narrative in English”.

If you are around, and if you are interested, please join us!

This two-day international seminar welcomes proposals about the role of the secret in contemporary narrative in English in order to articulate the relation between the individual and community. Secrecy may adopt different forms, often in dialectical confrontation. It may stand for the essence or substance (purity, sacrifice/violence, the sacred, political conspiracy) upon which the exclusive and excluding character of a community is built. On the other hand, secrecy – manifested as silence, interruption, marginality, alterity or death – may emerge as the space and language of illicit social bonds,  forbidden identities and peripheral voices in the face of normative  and essentialised forms of community and their discursive  codification.
Finally, we also find communities of secrecy that do not  respond to traditional and conventional collective forms based upon  national identity, social class, ethnicity/race, gender or sexuality.  The secret articulates the disembedding from totalitarian communities,  such as the patriarchal state, heteronormative relationships, the  colonial empire, or the ethnically/racially pure nation, and the  emergence of new relationships and spaces of freedom, based on a  secret sharing of love, friendship, or other non-homogenising  communitarian bonds, perpetually open to the difference of the other.

The concept of the secret traverses the communitarian thought of  Jean-Luc Nancy, Maurice Blanchot and Jacques Derrida, the three of  whom have argued against immanent communities, through an  ethico-political gesture that puts the emphasis on collective forms  characterised by irreducible singularity, secrecy and otherness.  Critics and theorists such as Frank Kermode, Matei Calinescu, Derek  Attridge, Nicholas Royle, J. Hillis Miller, Nicolas Abraham and Maria  Torok, or Esther Rashkin have also offered important insights into the  narrative, thematic, ideological, ethical or political role of secrets.

Suggested paper topics may deal with the secret in relation to the  following concepts: the inoperative community (Nancy), tensions  between traditional and elective communities of secret sharers  (Blanchot), cryptonomy and the ‘transgenerational phantom’ (Abraham  and Torok), unconditional secrecy (Derrida), Attridge’s singularity of  literature, the uncanny (Royle), speech acts in literature,  autobiography, trauma, the body, death, ethics.