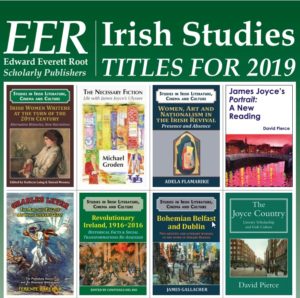 This is the new Irish Studies catalogue of the new titles published by Edward Everett Root, Publishers (with a 20% discount). As you can see, the new series of monographs in Irish Literary/Cultural Studies will be launched in the autumn/winter of 2019 with the publication of 4 new titles: Irish Women Writers at the Turn of the Century: Alternative Histories, New Narratives (ed. Kathryn Laing and Sinéad Mooney); Revolutionary Ireland, 1916-2016: Historical facts and Social Transformations Re-assessed (ed. Constanza del Río);
Women, Art and Nationalism in the Irish Revival, Presence and Absence (by Adela Flamarike); and Bohemian Belfast and Dublin: Two Artistic and Literary Worlds in the Work of Gerard Keenan (by James Gallacher).

Parallel to this, we have just signed for two new Series on Irish Women Writers in association with the Irish Women’s Writing Network (with General Editors: Kathryn Laing and Sinéad Mooney). These two new series, Key Irish Women Writers and Irish Women Writers: Texts and Contexts will be publishing monographs on key authors and unpublished or out of print texts by Irish women writers respectively. The advisory board for this is Margaret Kelleher, Heidi Hansson, Gerardine Meaney and James H. Murphy.