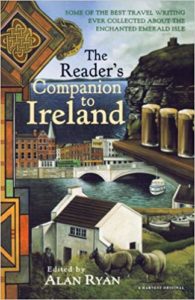 In the early 1920s, the Irish short story writer Frank O’Connor wrote, “Guests of the Nation,” whose lead short story of the same name ranks as one of the greatest in the English language. Ironically titled, it describes what happens to two English prisoners of the Irish. They have become friends of their captors, playing cards, when word comes that they must be killed. This is so because of the murder of two Irish prisoners on the other side.

“Guests of the Nation” in “The Reader’s Companion to Ireland” are hardly prisoners. Rather, welcomed they are, and they demonstrate Ireland’s traditional generosity of spirit to the stranger. The premise of this guide, eyewitness accounts of travelers’ perceptions about Ireland, is a great idea. The guide is carefully edited by Alan Ryan, an experienced travel writer.