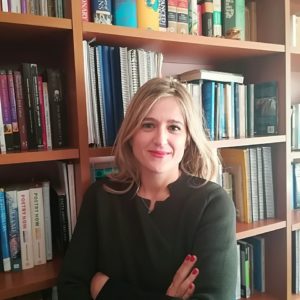 It is with immense gratitude that I assume the responsibility as Chairperson of the Association, and I take this opportunity to thank the members of the association for their support and trust. AEDEI has a very strong, consolidated history and I will work hard to continue with the great legacy of my predecessors: Inés Praga-Terente, Marisol Morales-Ladrón and Asier Altuna-García de Salazar.

I am also grateful to count on the best colleagues ever, a team of committed specialists on Irish Studies whose generous dedication to the Association is inspiring. In these difficult times, to embark on new projects such as this, and to do it with enthusiasm, is certainly a gift. It is also a privilege to represent the wide spectrum of scholars, spread all over Spain, who have produced – and are still producing – invaluable work on Irish Studies, from various disciplines, ranging from literary studies, linguistics, sociology, to history and music, among others.

We are most proud of what we have achieved during these 20 years, not only the consolidation of Irish Studies as a discipline which is now taught in various Spanish Universities, but also the foundation in 2005 of what has become one of the most prestigious journals in our field: Estudios Irlandeses  https://www.estudiosirlandeses.org/ .

We warmly welcome new scholars on the field, artists, or simply individuals who love Ireland, its history, and its rich culture.

Do not hesitate to get in touch with us! It would be an immense pleasure to welcoming you all in AEDEI.

The Spanish Association for Irish Studies (AEDEI) brings together professors, lecturers, students and others who share an interest in all aspects related to the history, society, art and literature of Ireland. It is a non-profit academic organization devoted to the appreciation and promotion of Irish culture in Spain.

AEDEI was founded at the University of Burgos in 2001 by Prof. Inés Praga, who was its first president and is now its honorary chairperson. Since its founding, AEDEI has expanded enormously, covering a great number of people working in the area of Irish Studies. The AEDEI annual meetings, which normally take place in May at a Spanish university, provide an opportunity for members to meet and exchange information. Membership can be secured by sending a message to the secretary.

Estudios Irlandeses is the AEDEI journal, a dynamic and specialized e-journal published once a year with contributions from scholars all over the world. Estudios Irlandeses aims to address an ample range of issues related to Irish studies and it has already become an international forum for original research in the field.

As chairperson of our association, I would like to express my gratitude and commitment to the association for this appointment. With this brief foreword I want to highlight the achievements of our association so far, both nationally and internationally. Since its foundation back in 2001 and with the help and dedication of former chairs, executive boards and all AEDEI members, we can proudly look back at our annual international conferences, our indexed journal Estudios Irlandeses, the peer-reviewed publications stemming from our conferences in national and international volumes and in indexed journals, the AEDEI research prizes, the research projects and the myriad of events in which AEDEI members have taken part, always bearing the banner of AEDEI and Irish studies in Spain.

AEDEI keeps on growing, and more importantly, sharing and spreading Irish studies at large in collaboration with Spanish universities and various institutions. AEDEI has become a forum for national and international lecturers, scholars and students who find passion and inspiration in Irish studies. AEDEI welcomes you all with open arms! In the global world we live in our challenge will consist in maintaining the robust health of the association and in expanding our disposition, knowledge and research so as to continue being a referent in the field of Irish studies.

In late May of 2001 the Spanish Association for Irish Studies (AEDEI) was founded in Burgos by a group of enthusiastic academics who gathered there on three sunny and unforgettable days. The opening session took place with the presence of the Irish ambassador, the president of the university and the mayor of the city, all of them witnessing the historical moment. It was then that our association was created but it is evident that it was not born from scratch but built on some previous pillars. In Spanish universities Irish literature, history or culture were traditionally concealed into subjects such as “Literatura Inglesa” or “Cultura y Civilización Británicas”; nonetheless  in the last decades important efforts were made to hold “cells of resistance” by creating Irish panels in national and international associations, promoting research projects, supervising Ph.D. dissertations and contributing with seminal books and essays. In addition, there existed some sort of oral tradition -in the most genuine Irish way- that made up for the lack of academic recognition, the lack of “a room of our own” in the Spanish university premises. A good number of us began to discover Ireland by chance, fate or simply by a random Erasmus programme that provided the younger generations with the “Irish opportunity”. All these factors -chance, fate, exchanges- generated a vivid dynamics of story telling in which people shared wonders about their stays in Ireland and passed on enthusiasm, encouragement.

It is not easy to defend the idea of an association in the Internet times. Communication has never been so fast nor has so much information been available to us. Nonetheless, nothing can replace an association that intends to be a true meeting point, a sort of watchtower from which all of us can look at Ireland both individual and collectively, a kind of crossroads of experiences.

We all have shared the heritage of living Ireland from the distance -a frequent strategy in Irish history and culture- and we are aware that in many ways the idea of Ireland -or Irelands, to be more exact- and what it represents to those who live there has been imagined by those who live far away from her. So the young Spanish Association for Irish Studies aims at creating an academic community in which we can contrast viewpoints and unify resources, strength, experiences and expertise.

Much is being talked about the current worldwide “hibernization” and our role as an association -should it be defined- would be to help understand the complexity of “Irishness”, which means a long and tough task. In other words, to offer the Spanish response to the wide range of discourses Ireland is writing at present. At the beginning of this millennium Ireland has become a shifting landscape which demands from us the acknowledgement of difference, hybridity and cultural mixing and in which facts like immigration or the peace process, among others, are to provide us with unknown meanings of the term “Irish”. So far the results have been eighteenth International Conferences and nine volumes based on them: Praga Terente, Ines (ed) Irlanda Ante un Nuevo Milenio (Burgos 2002), González Rosa (ed) The Representation of Ireland/s (Barcelona 2003),  Fernandez and Jaime (eds) Irish Landscapes (Almeria 2004), Trainor and Krauel (eds) Humour and Tragedy in Ireland (Málaga 2005), Altuna and Andreu (eds) Re-writing Boundaries (Barcelona 2007), Carrera et al (eds) The Irish Knot (Valladolid 2008), Clark and Jarazo (eds) In the Wake of the Tiger and To Banish Ghost and Goblin (Coruña 2010) and Morales Ladrón and Elices Agudo (eds) Glocal Ireland (Newcastle 2011), Oliva (guest ed) Revista Canaria de Estudios Ingleses. Special Issue. Other Irelands: Revisited, Reinvented, Rewritten (La Laguna, 2014), González Arias (ed) National Identities and Imperfections in Contemporary Irish Literature: Unbecoming Irishness (London, 2016), Losada Friend, Perez-Vides  & Ron Vaz (eds) Words of Crisis, Crisis of Words: Ireland and the Representation of Critical Times (Cambridge, 2016), Altuna García de Salazar (ed) Ireland and Dysfunction. Critical Explorations in Literature and Film (Newcastle, 2017), “Voice and Discourse in the Irish Context” Villanueva Romero, Amador-Moreno & Sánchez García (eds.) (London, 2018), Villar-Argáiz (ed) Nordic Irish Studies. Special Issue Discourses of Inclusion and Exclusion: Artistic Renderings of Marginal Identities in Ireland (Dalarna, 2016) and Irishness on the Margins: Minority and Dissident Identities (New York and London, 2018), Terrazas (ed) Gender Issues in Contemporary Irish Literature (Almería, 2018) and Trauma and Identity in Contemporary Irish Culture (Bern, 2020).

The 18th International Conference, that was held at the University of the Balearic Islands on 29 May – 1 June 2019, is the most recent landmark of our long and marvellous pilgrimage to which all of you are welcome.