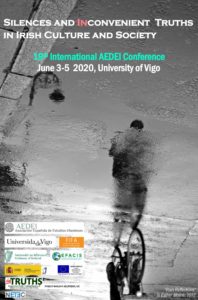 Dear colleagues, It is with real pleasure that we distribute the CFP of our forthcoming AEDEI Conference in Vigo.

It is a pleasure to inform you that the website for the forthcoming 19th
International Conference of the Spanish Association for Irish Studies is
ready and can be found in the following link:
https://aedei2020.wixsite.com/vigoconference

For a long time now cultural critics and thinkers have explored the relevance of silence from the perspectives of philosophy, psychology, aesthetics, linguistics and social and political theory. Ludwig Wittgenstein’s reflection on the limits of language has been famously summarized with the maxim “what we cannot talk about we must pass over in silence”;GeorgeSteiner has referred to silence as an alternative form of expression and has claimed that “nothing speaks louder than the unwritten poem”; Julia Kristeva has also theorised silence not as a symptom of passivity, but as a place for resistance and transformation,whereas Susan Sontag’s views on the aesthetics of silence ultimately derive from her concern with the modern artist’s reluctance to communicate. Within social history and sociology, Michel Foucault has approached silence as a form of oppression, a key element which operates within the discourse of power relations and Pierre Bourdieu, for his part, has claimed that“the most successful ideological effects are the ones that have no need of words, but only of laissez-faire and complicitous silence”. In her “Cartographies of Silence”, the American feminist poet Adrianne Rich wrote about “the technology of silence” and denounced that in a world where language and naming are equated with power, silence means oppression and violence, “a plan rigorously executed.”

Silence is multivalent and multifaceted, a discourse open to interpretations and a rhetorical, cultural and social practice that can function as a form of resistance, a strategy of defiance, empowerment and emancipation, but also a way of covering up stories which remain untold and invisible, thus distorting or directly concealing inconvenient truths from the public eye. Specifically in the Irish context, where James Joyce’s proclamation that the only available mode of expression was to be achieved through “silence, exile and cunning” has arguably haunted generations of artists, critic Paul Delaney has written about silence as the essential element in the aesthetic practices of contemporary writers and has claimed that many narratives are punctuated by “acts of silence”. Likewise, in his analysis of the contemporary Irish novel, Linden Peach maintains that writers are mainly concerned with“bringing what has been silenced out of silence.”

The discourse of silence, in all its varieties, underlies and permeates not only textual and cultural practices but has powerfully disrupted and shocked the very pillars of Irish contemporary society which, over the past several decades, has witnessed the upheaval in public opinion before the discovery of conspiracies of silence hiding many unspoken and unimaginable “inconvenient truths”. Unsurprisingly, notions of silence loom large in the background of considerations about how to appropriately revise Ireland’s past, approach the present and think about the future (how to break the walls of silence) on the part of many contemporary historians, journalists, cultural critics and artists.

In the light of all this, the19th AEDEI Conference “Silences and Inconvenient Truths in Irish Culture and Society” to be held at the University of Vigo, 3-5 June 2020, seeks to address the complex and multifaceted topic of silence by exploring how it is embedded in language, culture, society and institutions and provide a forum for the debate of alternative ways to discuss uses (and abuses) of silence in the Irish context. We invite proposals for twenty-minute papers that address these broad concerns. A suggested–though not prescriptive–list of questions that potential contributors may wish to interrogate and/or illustrate includes:

-Silence, discourses of authority and legitimacy

-Silence, the unspeakable and the unspoken

-Silence, nature and the environment

-Silence, the body and the mind

Proposals for themed panels and roundtables are also welcome. Please, include “Abstract AEDEI 2020” in the subject line of your e-mail. Author’s information is to be provided in a separate file, including name, affiliation, contact address, paper title and author’s bio-note (150 words). Please, name the documents as follows:

– A selection of the papers presented at the conference will be published either in an edited volume or in a special issue of an international journal, bearing in mind that all those presenting must be paid-up members of AEDEI.

It is a pleasure to inform you that the website for the forthcoming 19thInternational Conference of the Spanish Association for Irish Studies isready and can be found in the following link:https://aedei2020.wixsite.com/vigoconference We kindly remind you that the dates of the…

Dear colleagues, It is with real pleasure that we distribute the CFP ofour forthcoming AEDEI Conference in Vigo. 19th AEDEI Conference “Silences and Inconvenient Truths in Irish Culture and Society”. University of Vigo, 3-5 June 2020. For a long time…